In an attempt to compete with apps like DoorDash, GrubHub & UberEats, Domino’s will now use electronic bikes for pizza delivery. In collaboration with Rad Power Bikes, the pizza company hopes to become more economical with this move.

In an announcement, the company informed that hundreds of e-bikes will deploy through corporate-owned chain stores later this year. The targetted cities are Baltimore, Miami, Salt Lake City, and Houston.

The Purpose of The Switch

This announcement is made as Domino’s, who specializes in making pizzas, is facing a lot of competition from major delivery apps like UberEats that gives customers a wider choice.

During the press release of the e-bike program, Greg Keller, Seattle Domino’s franchise owner said that these E-bikes are a game-changer for their franchise.

They have been delivering with the traditional cycles for over three years now, facing a lot of issues with the hilly areas of Seattle. But with the launch of e-bikes, they will be able to save money, provide better service and increase hiring and managing a happy workforce.

Although dominos cannot offer enough menu options to compare with DoorDash or UberEats, it can compete based on service and delivery time.

Everything To Know About The E-Bikes

According to the company, these e-bikes are well-equipped with minute combined motors. This helps with pedaling, and also can go up to 25 to 40 miles, depending on the rider, before it needs to be recharged.

The bikes are provided with lights, front and back, along with profound materials for the safety of the driver. Moreover, they have a top supported speed of around 20 miles per hour.

To match the company’s needs, these e-bikes have been customized to hold pizzas, sides, and drinks. One e-bike can carry up to 12 large pizzas.

The company has tested these e-bikes and noted that service and delivery times have improved.

Domino’s executive vice president of corporate operations, Tom Curtis, stated that these e-bikes also opened up the scope of hiring more recruits in the company, which allows candidates who don’t have a car driver’s license to apply. 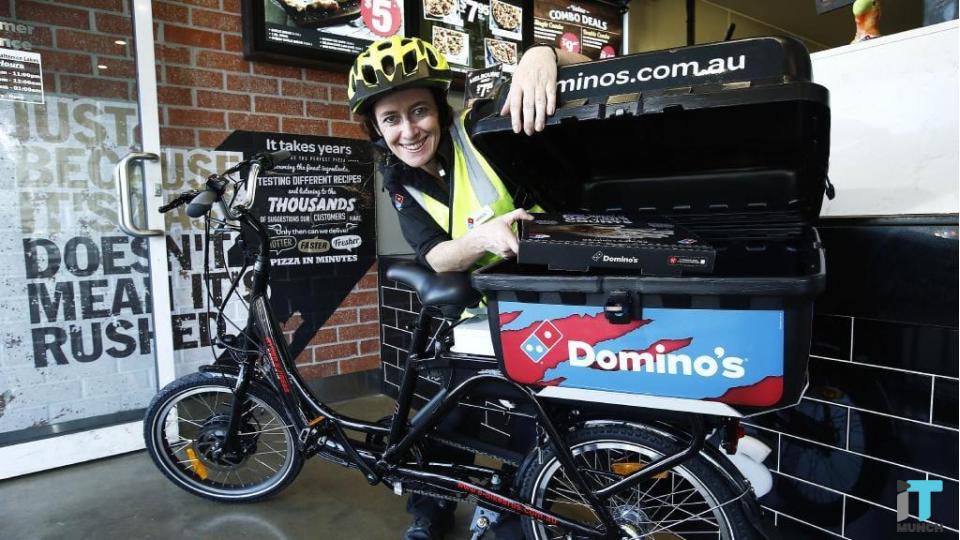 The Vision For A Brighter Future

Besides this, the company has also collaborated with other companies like Ford, which will test pizza delivery using self-directed vehicles.

Domino’s introduced a new trial for self-driving pizza delivery in Houston in collaboration with Nuro, earlier this summer.

Domino’s will now use Nuro’s R2 vehicles, the second-generation self-directed electronic test car, which should most likely launch later this year.