Researchers from Harvard University have created a new motorized suit that will make you feel a dozen pounds lighter while walking or running.

Scientific American reports that the 11-pound suit can help anyone who has to walk significant distances, which includes recreational hikers, military personnel, and rescue workers.

According to these researchers, this method differs from the previous suits, because it can make it easier to both walk and run.

Why Are These Suits Different?

The challenge is that your legs work in a different manner depending upon whether you are walking or running.

The team says that when you are walking, your centre of mass moves like an inverted pendulum.

And while running, it causes to move like a spring-mass system.

The method needs to be able to adjust with both of them, and also sense when the user’s pace changes.

The suit works when the motors on the lower back connect to the user’s thighs via a series of actuation cables.

If force is applied to these cables, the system can help the gluteal muscles in fuelling the legs.

This whole setup is driven by a waist-mounted battery which has enough range to move around for five miles.

The suit is a total combined weight of only 11 pounds, yet the team is currently trying to develop a design that weighs 40 per cent less.

Besides helping people who need to cover vast distances on foot, the team also hopes that this suit can help anyone with a disability that restricts walking.

However, the suit is not without its limitations. 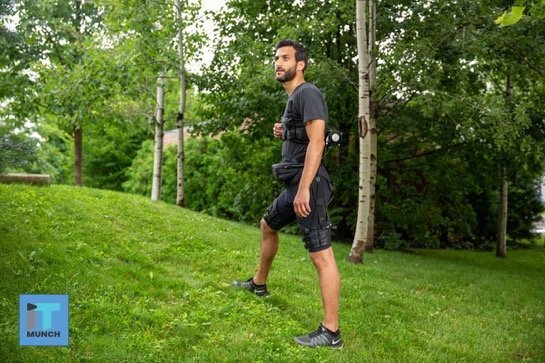 The look is very bulky, especially around the lower back, where it would limit the user’s ability to carry a full-sized backpack.

The system is also created around the walking styles of males since it can be hard to tailor to individual body shapes and different movement styles.

However, Scientific American also reports that new versions are currently in development for women.

The team of the researchers also hopes to increase the approach to help workers from the industry who perform physically and strenuous tasks as well as help people with gait impairments.