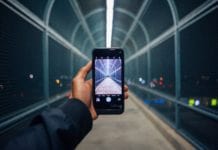 According to the latest startup news, Blippar announced the launch of its new indoor positioning system. This startup company is a leading augmented reality (AR) and computer vision organization.

Blippar has paired the accuracy of indoor visual positioning with its computer vision for an interactive AR. This system allows any indoor environment, including large spaces, to be converted into a detailed and immersive AR experience.

Blippar’s expertise has allowed the company to develop its latest product by using computer vision for location-based AR. With this system, the user can make use of their camera to navigate through indoors. This system could come in handy in large complexes, airports, shopping malls, supermarkets etc.

Blippar is a London based startup and a leading technology company that specializes in AR and computer vision. Their artificial intelligence technology trains lenses to recognize and understand its surroundings.

The UK based company was launched in the year 2011 and their technology is used by world-leading brands such as Porshe, Cadbury, L’Oréal, PepsiCo and many more.

Benefits of Combination of their AR System in Different Applications

AR has already made its presence felt in this field. With the introduction of Pokemon Go, the possibilities are endless in this field.

Augmented reality can also be seen in a lot of applications such as furniture, paint etc. Users can make use of their camera to see how a particular design would appear in their surroundings.

The visual positioning system by Blippar could help travelers discover the main tourist attractions and use the guide system.

Augmented reality could be soon used for displaying menu items in order to make them appear more appealing to their customers.

One of the most impressive things about this startup company is that it is one of the first to provide an easy and practical end-to-end solution. Another feature of their system is that their indoor visual positioning does not require access to a visual mapping of the surrounding.

SEE ALSO:Raleigh Startup to Use AI for Alzheimer’s Patients

The Future of Blippar

The future of Blippar looks promising, and as mentioned above their AR system could be put to use in various applications. Their vision is to harness the power of technology and data in order to bring the digital and physical world together.

By focussing on the two main technologies of augmented reality and computer vision, Blippar hopes to enhance everyday life with a range of products.

Obstacles and Potential Opportunities for Blockchain Startups to Expect in 2018