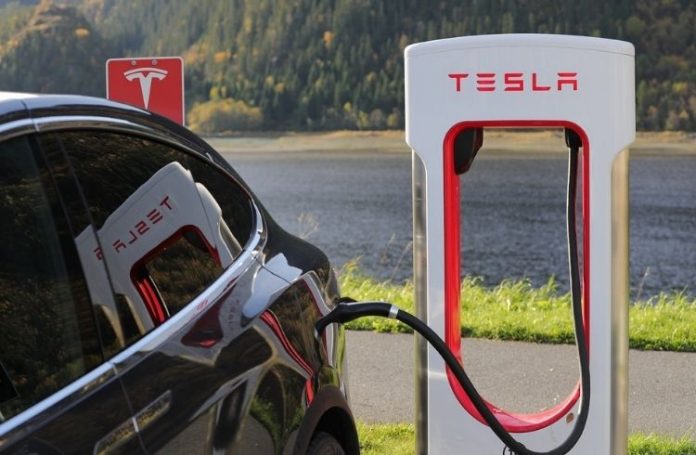 Elon Musk-owned electrical vehicle company Tesla has filed a new trademark under “restaurant services” for its brand. The sign couldn’t be clearer that Tesla is finally ready to expand facilities around its EV charging infrastructure, including restaurants.

The automaker is finally delivering on an idea Elon Musk (Tesla CEO) and other company execs had talked about publicly in 2017. Tesla has applied for 3 fresh trademarks that’ll cover the following categories:

The trademark was filed on May 27th 2021 with the U.S. Patent and Trademark Office. The patent application is awaiting approval which is to be provided after examination. The application will also be reviewed by an attorney.

Why is Tesla thinking about entering the food business?

It is quite natural to wonder why an EV manufacturer is suddenly expanding to the food industry. To answer the question, we’ll have to take you back to 2017 when JB Straubel (then-Chief Technology Officer) said at FSTEC, a restaurant tech conference, that Tesla might move into the restaurant business. The idea the company is chasing is to turn electrical vehicle charging stations into “full-service convenience stores” that also “serve food.”

In 2018, CEO Musk had also dropped a hint about this idea in a tweet by saying that Tesla might “put an old school drive-in, roller skates & rock restaurant” at a new Tesla Supercharger location in Los Angeles.

Gonna put an old school drive-in, roller skates & rock restaurant at one of the new Tesla Supercharger locations in LA

And just a couple of months later, the automaker company practiced what it preached. It applied for building permits for a Supercharger station and a restaurant in Santa Monica, LA. It was essentially a scaled down version of the idea. Tesla built it as a lounge, like the ones at its Kettleman City (California) Supercharger station.

The project was not active for about 3 years until recently new building applications were submitted earlier in 2021. However, the new plans did not talk about a restaurant.

As there was no update regarding this aspect of Tesla’s business, it was assumed Tesla restaurant was a no go. But Elon Musk actually said last month in April that he’s still hoping to have a “‘50s diner at the location”.

Also, this isn’t the first time an auto industry player has decided to enter the restaurant industry. The Supercharger restaurant by Tesla isn’t as revolutionary as it may sound. However, it does have a great scope for bringing creativity to the electrical vehicle space by giving people another incentive to purchase Tesla’s EVs.

The Securities and Exchange Commission (SEC) believes that the Tesla CEO Elon Musk violated his settlement agreement twice. The agreement between the SEC and Tesla requires a company lawyer (from Tesla) to vet and approve Musk’s tweets about Tesla.

The watchdog said to Tesla that it has noticed Musk’s use of Twitter (the 280-character microblogging platform) has violated the settlement twice. The SEC had ordered the EV manufacturer to approve in advance any public communication by Mr. Elon Musk about Tesla.

Lawyers of Tesla did not review a tweet by Mr. Musk posted in May 2020 about how the stock price of Tesla was “too high imo” (IMO – In My Opinion) before he published it. The company lawyers also did not approve a July 2019 tweet about a goal of Musk to make 1000 of Tesla’s solar roofs per week by the end of that year.

The SEC sent the notice to Tesla in the years 2019 and 2020 shortly after both the tweets, but hasn’t taken any enforcement action against Musk or Tesla.

Originally, Musk found himself in trouble with the securities watchdog after he tweeted “[f]unding secured” to take the EV company private at a price of $420 a share.

The following September, the SEC charged him with securities fraud and the two parties involved settled soon after that. Tesla CEO agreed to step down as the EV manufacturer’s CEO. Moreover, he agreed to have his public communication regarding Tesla vetted by lawyers.

In the beginning of 2019, the Securities and and Exchange Commission asked a judge to hold Elon Musk “in contempt of court for violating the original settlement.”

The SEC found later that the lawyers of Tesla did not approve the tweet and took Elon Musk and the company back to court. Both sides ultimately agreed on a more specific process of vetting Musk’s tweets about Tesla, especially about production, delivery or sales numbers.

One of the SEC’s enforcement officials, Mr. Steven Buchholz wrote a letter to Tesla in May 2020 which was obtained by the WSJ said that Tesla has “abdicated the duties required of it” by the order of the court. This was in response to Musk’s tweet about Tesla stock price to which Tesla responded the tweet was simply Musk’s opinion.

In late 2018, Elon Musk went on 60 Minutes to say that his tweets are being approved by no one despite the settlement. Musk’s public attitude toward the SEC has not changed a lot from what he said on 60 Minutes. Once, he also tweeted that “SEC, three letter acronym, middle word is Elon’s.”